A young team of professionals will guide the public into a modern-setting of an opera which premiere is dated back in 1790. The stage looks like a modern sitcom, and cameras are capturing moments of life on stage, and behind it. All is displayed for audience visibility at a large screen which will hold other surprises on the performance days. A new way to discover Mozart suited to everybody (opera lovers and non). An experience to share with the whole family. A chance to see how "Così fan tutte"'s life is seen through today's eyes.
The expectations of those who are used to a traditional performance could perhaps remain unfullfilled, or opened for new levels of art enjoyment.

Actually, in young director Toni Burghard Friedrich's "Così fan tutte" there is not only Mozart, but a lot more. As per Mr. Burghard Friedrich, "In my 'Così fan tutte', the American sitcom meets the European Opera". From this meeting come out funny scenes, hilarious moments and a new interpretation of an opera not yet seen here in Dresden.

In the true Mozart spirit, "Così fan tutte" by Szene12 shows in our today's world that time passes by but the human nature does not change.

Bring your mobile phone, get on Twitter, adjust your camera, and do not lose the chance to play with!

Così fan tutte con be follwed on Twitter  and on Facebook . Twitterstream on #Cosifantutte
Gepostet by Angela Incampo unter 3:49 PM No comments:

On Tuesday September 10, 2013 German State Minister for Economy and Technology, Dr. Philip Rösler had announced on Twitter his coming to Dresden, to discuss with Silicon Saxony e.V. (the cluster initiative of the microelectronics industry around Dresden) the impact and relevance of #Industrie4 at GLOBALFOUNDRIES Fab 1

Dr. Rutger Wijburg, senior vice president of GLOBALFOUNDRIES Fab 1 (Dresden, Germany), and Fab 8 (Malta, USA) mentioned in his welcoming speech to the crowd, made of several dozen representatives from education, business, politics, and to the media that the immanent role of microelectronics will be combining economics, and technology as a boundary object. There is no field in daily life which is untouched by microelectronics, making this field even more relevant in the future than it is already today.

State Secretary Hartmut Fiedler mentioned Minister Rösler's visit to Silicon Valley earlier this year, and also the visit of Peter Thiel (here video about his visit [German]) to Berlin on September 2, 2013 on Minister Rösler's invite. Together with mentioning his own visit with members of the Saxon State Government to the "Tech Valley" in upper New York State, where GLOBALFOUNDRIES Fab8 is located, it became quite clear in the room that "speed of innovation is not an option". 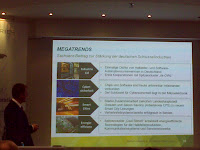 Helmut Warnecke, CEO of Infineon Technologies GmbH and vice president of Silicon Saxony e.V., emphasized in his presentation the relevance of the microelectronics for the industry in Germany, and especially its economic leverage potential for other downstream of the economic value chain. The prominent gathering of not only larger microchip producing plants and their suppliers but especially the closeness to the university research institutes, and Fraunhofer, Max-Planck, Leibniz-, and Helmholtz-Society institutes in the region around Dresden built on a legacy over a century in electronics. Since 1961 microelectronics has made the region the perfect place to foster innovations. Helmut Warnecke's quote "Is microelectronics everything? No, but without microelectronics is everything nothing" made clear what the emphasis of the meeting was: stating a clear commitment to the future relevance of this specific industry part in Germany.

With the most recent decision by SEMI International Association, San José, to split the most prominent trade fair about microelectronics, SEMICONEuropa, between the clusters in Grenoble and Dresden on rotating yearly basis, it became ever more relevant to hear what Minister Philipp Rösler had to offer.

Philipp Rösler pointed out his own recent experience with the startup scenes in Silicon Valley, London and Tel Aviv. He ensured the audience that German technology and entrepreneurial spirit bears the capacity to compete at highest levels with those other tech regions in the world. What he had seen however, especially around the example of Stanford, is the not yet fully used potential to create fast, and smoothly business models to transition from university (studies or research) to startups. Though the upcoming German elections lowered the impact of his words, he emphasized on the strong government will to keep the German-based complete value chain of microelectronics intact, and even thinks of bringing investor role-models like Peter Thiel or Marc Andreessen closer to the German technology and entrepreneurial communities.

His main points however, especially in respect to the big players in the microelectronics field in Germany, were on the EEG (Renewable Energy Sources Act). In its current version it's forcing energy prices to go up, harming energy intensive industries in their competitiveness with the world market. Which once was meant to accelerate the renewable energy production has led to a misallocation of money. His second focus point was on making the startup conditions for entrepreneurs and innovators in the "non-apps world" easier in Germany, not only on the financial side (which some voices from the audience were drawing attention to) but also on the surrounding conditions. These are by far, concerning transparency, speed, interdisciplinary, not similar today to what can be observed in Silicon Valley, which btw also started very much as largely public project funded.

In the follow-up public discussion financing issues for scaling startups, and the lack of a viable, and visible VC capital (venture capital) scene especially in Saxony came up. These questions could not be answered in this round, but set a clear signal. Silicon Saxony as the main European hotspot in microelectronics, including adjacent fields like nanotech, life sciences, computer science, and organic electronics has the potential to reach up to the envisioned future by enabling the entrepreneurial spirit to flourish in the region once again.