Easter - A Time of Rebirthing

Sometimes you bear thoughts you'd like to share with someone, but don't dare to do so. Then there comes a unique opportunity where sharing something like this is part of the course curriculum as in the past ScalingUpMOOC gracefully led by Stanford professors Huggy Rao and Bob Sutton.

One of the early, individual exercises was the PREMORTEM Exercise which I'd like to share today on Easter Sunday which stands for death and rebirth at the same time. Only taking the courage to move forward when all seems to be stuck, or fail, is when you succeed in life.


Happy Easter to All and thank you to all who have helped over the course of five decades to become who I am today, and in the future !!!


It is a day late in summer of the year 2017, the academic semester is shortly to begin and CitizenScienceLab should have been running as a high-level on-institute of the local university as their multi-disciplinary system dynamics institute.

Not quite so, the project had not taken off to reality, and the properties where it would be housed in the future are still abandoned, and unused (probably awaiting real estate speculation, or other).
What had happened?

Early in 2016, all looked promising, the years of connecting across the globe with top leaders in the field seemed to take fruit finally and scaling towards finalization looked as being just a mile ahead. What we underestimated was the inertia of institutions and their stakeholders to give us backwind to propel what sounded like a must in the turbulent times of the refugee crisis that had a massive (negative) impact due to weekly protest marches and bad-mouthing across the world, which did not stop before foreign researchers that the university was attracting just months before due to playing a prominent role in the Germany-wide "excellence initiative" in order to raise global awareness of scientific and research excellence in the region. An urge of action by the various government, city and business constituencies not taking into account of going for another more sustainable approach that what has a positive impact on the "learning society" seemed still the norm, as it often is the case in crisis situations.

The initiator of the project, thus known in the city and government circles over the years, undebatable had low credibility as everybody knew that two of his ventures (a consulting firm, and a coworking space he brought up in the aftermath of the financial crisis in 2009/2010 both failed). His global connectivity sort of scared people away, who were bound to their local communities, and often did not dare to speak in English or other languages than German. To overcome this shortcoming, he had built a global network of mentors, supporters and useful connections that even led him to C-level executives in VC funds, and tech giants hoping to tie all this together (via digital technology, for this he had initiated another startup in order to build up the trust of the local tech, science, arts and academic community over the years).

Yet all this did not look like a real scaling effort, and really hard work to most people around him, and who would be needed to bring the project to lasting success.

Being an „outsider" to the local community and a born West German respect and trust was not as high brought back by local stakeholders so it would have fueled positively the process, and being not in the academic circles sort cut off from any support from institutions that are currently supported financially within a running governmental funding scheme. So things just took time to evolve - too long it seemed.

What really „killed the cat" was the fact that various aspects and focus topics of the CitizenScienceLab, such as action learning, lean thinking, Theory U, system dynamics being used to solve complex challenges, whether, in the business, educational, governmental or societal context seemed way too broad and disconnected for most, especially scientists who became interested in the concept and offered to support and scale. In the end, everyone is just close to their own issues, life & work challenges. And the viable business model had been vague for too long, especially as there is nothing comparable to the idea (even though the former Dean for Graduate Education at MIT, Christine Ortiz just stepped back from this position in order to found a new kind of university without professors, curriculum or major, mainly based on project-based learning). The concept of citizen science is literally unknown in the region, and attracting larger parts of the civic society to get involved did not work, partially due to missing incentives or language constraints.

The mindset of scaling, especially in the face of obstacles, sometimes putting a gear down in speed is an unfamiliar assumption in society here, where it is believed that success comes from hard work and going through "concrete walls" (if it needs), where the founder and his team are mainly focusing on finding the most elegant solution with the given resources, and having the future (long-term) in mind as well.

As progress did not positively scale new people for the team did not show up, perhaps also due to not doing marketing and attracting bright minds to co-create this new institution in the city that is known lately for being reluctant to quick change (even for prototypes).

Even though the project is not running in 2017, being ready for the first students, entrepreneurs and citizens to learn about how to bring a systemic view and understanding to solve their complex challenges, there is no end to and a next future milestone for 2018 will be set (with all the learning along the way to play out in a positive way).

PS.: Anyone eager to learn more about what has happened over the years, and where it all originated, here the complete story from the beginning.
Gepostet by RalfLippold unter 11:39 PM No comments:

Over the span of five days, March 9 - March 13, 2016, the world meets in Berlin during the 50th International Tourism Trade Show Berlin (Internationale Tourismusbörse Berlin or ITB at short) at the trade fair area around the famous Funkturm near the former race track AVUS.

March, still a rather cold month in Germany, and yet the best opportunity to experience the world at large, from Israel to Hiddensee, from the Netherlands to Saxony - spanning across all possible destinations. Besides strolling around the vast area, the focus was during yesterday's visit to ITB as HTxA - HighTech x Agency on Saxony, and its vibrations within the global "tourism orchestra".

In Hall 11.2 (not far from one of the main entrances North entrance, close to ZOB) the three East German states, Saxony, Saxony-Anhalt and Thuringia collaborated along with the focus on being "Cultural Heart of Germany". 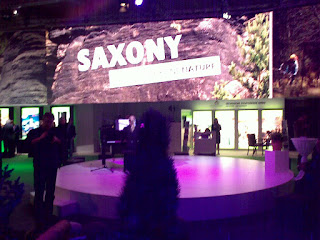 The motto of this year's invitation to the global tourism community by the Tourismus Marketing Gesellschaft Sachsen mbH (TMGS) at ITB is titled "Saxony - Feel the spirit of nature! Sachsen - Spüre die Natur!" - and this is what you experience when entering the hall, which is compared to some other halls (which often have large windows and high ceilings) rather cosy and is reframing with installations and a huge video screen being somewhere in the Saxony Switzerland. Of course, is not everything Saxony has to offer, and other parts of the state surprise with industrial and cultural heritage. The most prominent may be the Gewandhaus Orchestra Leipzig, Saxon State Opera Semperoper Dresden or the famous Porcelain Manufacture Meissen (April 22.-23. 2016 there is the upcoming Open Day Bellevue Arts Museum in Washington State). 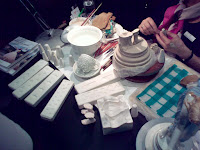 where you can get a personal feeling what it means to handcraft the pieces of art in porcelain; currently the co-created artwork "Forbidden Fruit" by Chris Anteman who attended the ArtCampus at Meissen® can be seen at the

As Saxony, besides being a central part of the reformation and culture in general mainly driven by far looking monarchs like August the Strong, always had a strong focus on technology (not just today as the centre for semiconductors and microelectronics, namely "Silicon Saxony") and at various places, you can combine the outdoor activities with having deeper looks into the past of such as Chemnitz with its Saxon Industrial Museum. Radeberg (just a mere 30 min train ride from Dresden and at the north-eastern part of the Dresden Heath) where not only beer has a long tradition but also a new exhibition on its industrial and innovation legacy at Schloss Klippenstein (article in the Sächsische Zeitung [German]).

At the second day of the ITB The Saxonz, a Saxon breakdance group that has also done some projects in the past with dancers of the Semperoper Ballett, has won a prize with its clip "Life is a dance". The video not only is stating the beauty of the nature that can be encountered in the countryside all around Saxony in often quite diverse forms but also the spirit of doing sports in many variations.

Are you getting curious about Saxony and whether considering visiting this unique state in the south-eastern part of Germany?

Check out the website of the Tourismus Marketing Gesellschaft Sachsen mbH (which offers information in over a dozen languages, and is also present on Facebook) and don't hesitate to ask on specifics - there are lots to explore in Saxony, not just a short visit to the big cities, and you definitely need some days (eventually weeks).

.... and some finalizing thoughts here the #PresencingStatus on yesterday's visit to ITB and the appearance of Saxony: 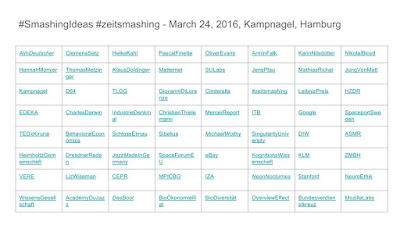